One Sheet, One Weekend, One Boat

The concept of a one sheet boat has been around for a while. I saw it as a challenge in time as well as space. Work is doing summer hours right now, so I took off Friday afternoon and went out for supplies.

I really liked the idea of the One Sheet+ plans from Ken Simpson so I bought them. The BOM called for a single sheet of 1/4" plywood, a 2'x4' section of 1/2" plywood, and 5 1x2 furring strips. The furring strips came bundled as 6, so I figured I could use the extra one to cut some chines. This was laid out so I was ready to roll on Saturday morning! 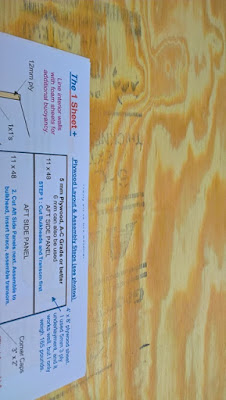 I didn't follow the plans exactly. They call for tape & glue construction, with no screws at all until you add the skids to the bottom. I couldn't make that work, so I decided to cut some chines. It looked like there would be plenty of scrap furring strips so I decided to cut first and chine later.

First I cut out the split parts from the 1/2" plywood. They go back to back to get the same angle cut into the sides, and that helps you line up everything else. Then the plans had you start cutting at one end of the full sheet of plywood and eventually spec down to the other end. Cut then assemble, then cut more to spec then assemble again. I decided to cut as much as I could first, then assemble as I could. Mostly this gave me the flexibility to measure the gunwales out of the 1x2, then use the scraps from those boards to cut chines and assemble with screws.

Problem #2 was that I didn't have screws that were the right size to go through the 1/2" plywood! oops. I used a 3/4" flat head screw setup for most of it. But then I had to make a return trip to Lowe's to get some 1" screws, d'oh!


The plans actually did not call for a stem but I wanted to add one anyway. I've been reading about stem construction from lofting lately and wanted to try those same techniques on my experimental boat here. It's a straight stem, so I marked out the rabbet, apex, and bearding lines and cut it out on the table saw. Then test fit with the cut plywood sides and finally cut out the bearding angle onto the front. This was a really nice detail when it came together and the one part of the project that I'm actually pretty proud of. And nobody can see it in the final product. ha!


ah, it's more boat than plywood now! With no bottoms yet, you can see the basic shape of how the boat comes together. This is a nesting plan, so the front half is supposed to fit inside of the back half. That means you have to build the front & back separately. At this point, I was able to measure & cut the 1x2's for the rubrails (gunwales) meant for the outside top of the boat - creating scraps that I needed for assembly!

I already had one extra furring strip, figured I would use that for the chine rails to attach the bottoms. I started by ripping it in half, getting two strips that were 3/4" square. Then with that same setup on the table saw I ripped three of the scraps in half to use for the corners. I needed three strips at least 11" long, then ripped in half to make 3/4" square strips for the vertical corners in the back/back, front/back, and back/front of the sections. The stem already took care of the front/front.

I used Titebond III this time because it is totally waterproof, that's what the plans suggested. Glue & screw the plywood into the chines, keep those joints nice and tight. Then it's time to cut the bottoms to spec by tracing them out from the assemblies.


And that all happened on 8/5/17. That is one solid day of boatbuilding!! I started out buying supplies on Friday and ended up with fully formed boat parts on Saturday. They might even float in this condition. I've got roughly $38 invested in this project so far, and still have plenty of woodworking to go on Sunday.
Posted by Carolina John at 8/24/2017 11:30:00 PM No comments:

Email ThisBlogThis!Share to TwitterShare to FacebookShare to Pinterest
Labels: OneSheet, Step One

I finally managed to get a weekend free from the deck building in order to get some other stuff done. That stuff started with the two extra sheets of 5/8" plywood clogging up my shed that needed to be cut up into canoe forms! 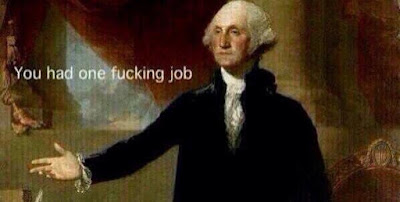 These sheets have been laying around since before I started working on the rowboat. I had the plans duplicated around the time of the Masters golf tournament, then cut them out shortly after. So now the plywood is there, and the first step to building a canoe is cutting out the stations. Next up I'll have to buy the cedar and cut it down into 1/4" strips, then attach those strips to these forms. Time to cut some forms. 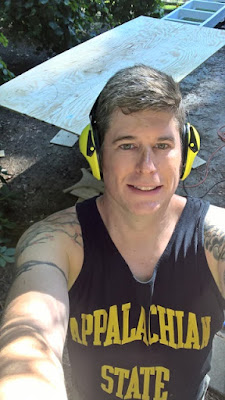 Email ThisBlogThis!Share to TwitterShare to FacebookShare to Pinterest
Labels: Canoe

Wrapping up our deck project isn't really wrapping it up. It's one of those projects that never really finish, there's always more to do with the landscaping, or building the next patio. But now we have enough finished to show off a walk through and put a button on this series of posts. It's time to get back to building boats! 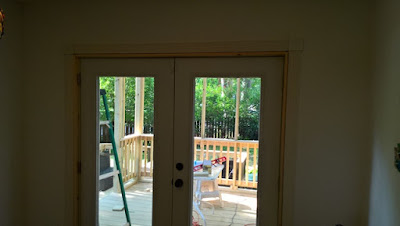 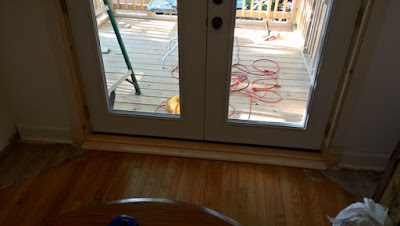 For the inside of the door, I ran molding around on the wall and put a relief inside of the jamb. We custom cut a threshold as well, then ran baseboard and quarter round. I actually replaced all of the baseboard for the entire room. Since that picture was taken, I have gotten a coat of paint on the walls and the first coat of paint on the molding. It still needs some caulk to fill in some gaps and another coat of trim paint. I wish I had sanded more as well. But it's up and the floor has been repaired and the wife is pretty happy with it. 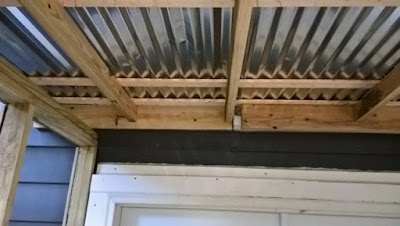 
So there is still some work to go. We need to add skirting around the bottom of level 1 and 2. I still think we need to add soffitt around the roof edges, but that might not happen. Hardscape is still going into the landscape - I've got the bricks down and that is going to lead into a pea gravel path. The side with the deck box is going to get a stone patio of some kind. There's going to be lots of plantings all around. We're expanding the grass area of the backyard significantly so when the time of year is right, there's lots of seed to spread and beds to define. Until then it's all this: 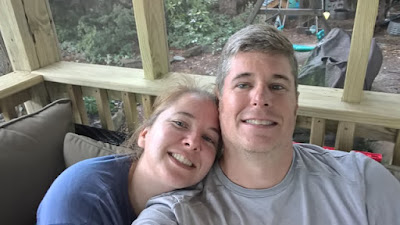 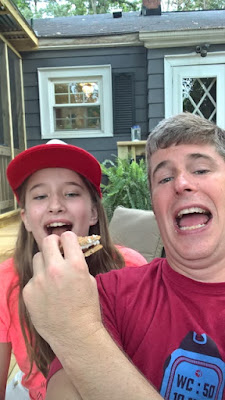 So I got the first wall of the screened in porch built and standing during the July 4th building vacation. That meant any further progress would be nights and weekends after work, but there was still plenty to go until we finished this build. 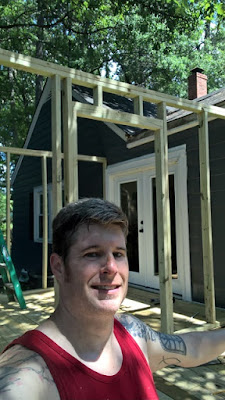 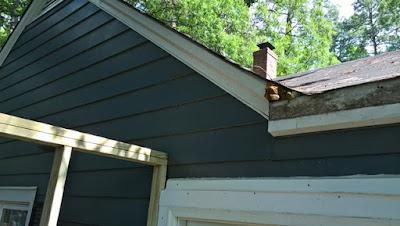 The next weekend I finished off the other two walls. The outside sill plate extends for a foot on each side to support the roof. I cut the walls to finish at only 94" high. We want to put up a ceiling fan inside, so any shorter than that and I wouldn't have enough clearance for the fan. The problem occurs a couple of pictures up. The existing roofline comes down to some gnarly bend where I had to remove a gutter. Creating this shed-style roof over the porch is the kind of problem that kept me up at night trying to figure out. There wasn't much slope to begin with, how in the world can I figure this out? 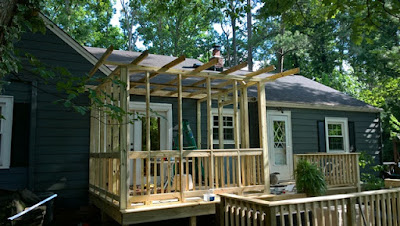 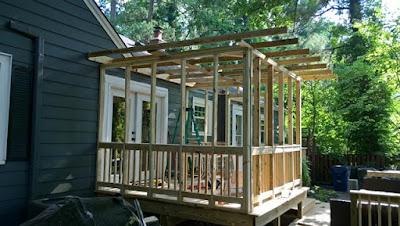 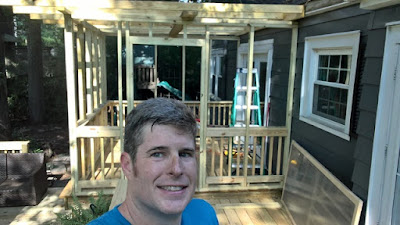 I added a 1x10x12' center support for the rafters and a ledger board where the gutter was removed and on the side of the house. This is the only place in the entire build where I didn't hold up to normal building code. The low slope of the roof only left me space to use 2x4x12' rafters. Since I put up a tin roof they are spaced 2' apart. Code says use 2x6's for a 12' span, spaced 18" apart. But my architect cousin told me that tin was lightweight enough for the 2x4's to hold up.

In hindsight, I should have built the deck about 6" lower to the ground. I wanted it level with the bottom of the door & interior floor, but there is no way I could have known there would be a roof slope problem before the floor was up. I mean, unless I actually used drawings or plans and the architect would have seen that and solved the problem before I started. Originally we wanted to shingle the roof and tie it in with the existing shingles. We also wanted to extend the roof over part of level 2 as well. Once we decided to go tin the extension was gone.

This really goes to show the lesson in planning. I'm a builder. I sketched out the basic outline of the rims of the deck on the back on an envelope to get the 3 tier design, then started buying lumber. There were no other plans or outside input. Now I've got a flat roof. Well, it's not really flat water does run off fine. But the rafters are not up to code.

Overall, yes, we are thrilled with the way the porch came out. We still (as of 8/10/17) have not gotten electrical run out there. But it's going to happen eventually. This porch is 10' x 10' square with a 36" door. I used 2x4's for all of the framing even the roof, and 12' x 26" tin pieces made the roof. I added flashing where it hit the side of the house and more flashing where it hit the existing shingle roof. Used a special gray caulk made for bonding to metal I caulked between each sheet of the tin and went heavy where the tin hits the house. This roof is 12' wide so it took 6 pieces of tin and 2 tubes of that caulk. But it is watertight! Overall, we love it.
Posted by Carolina John at 8/10/2017 11:26:00 PM No comments:

Carolina John
I am a sterotype living Raleigh, NC with the wife and 2 kids. 40+, endurance junkie with a penchant for marathons, trail, and triathlon races. It keeps me smoke free and happy. I also enjoy organic gardening and healthy eating, and work as a software developer.