This one I built for a friend at work, she absolutely loved it. The cool part was that I built it pretty much in a day. I started with rough cypress and pine, built the frame, then wrapped everything with the cypress so I had to size and mill one piece at a time.

At this point, I have to mill the cypress one piece at a time. The boards are rough cut 1x6, which means they are actually 1" thick and 6" wide, not the nominal dimensioned 3/4" x 5 1/2" boards you normally buy at the store, this stuff is air dried straight from the sawmill. So I need to first cut a square end on the board, then cut to length for the piece that I need, cut around any defects, rip it to the 2.5" width that I need from the table saw, then feed it through the planer to get all of that exterior graying ripped off. Then I can nail that board to the frame.

This is WAY more work than if you could just buy clean 1x3 cypress boards at the big box store. But you're going to pay about 12x as much, this cypress was only $2.50/boardfoot and most Lowe's/Home Depot's don't even carry it. The most comparable thing they carry is oak for around $15 per bf, and I get it rough cut from this sawmill for about $2/bf. No way I want to pay big box prices for that. And I sell these beds, so I'm not even the one footing the bill.


Man that cypress is beautiful! It is a naturally oily wood, but starts out very light then can gray over time if you leave it natural. I prefer to stain or seal it.

This was the easiest install yet, my daughter and I just had to carry it up the stairs. Lisa wanted a shorter back on this one, I thought it turned out absolutely fabulous. It's a clean look with a long lasting finish that will give her some outdoor comfort for a long time to come. Most importantly, she absolutely loved it!

I have a cousin in Greenville who is an attorney. He recently built a new house, and floored it with some walnut from trees that were cut down from some hunting land his father owns. The flooring was ripped into veneer and put on something stable, it really turned out amazingly beautiful. He did have a few really nice slabs of walnut left over, and liked the live edge look. So I offered to make something cool out of the slabs. This turned into a couple of really sweet end tables. I had enough left over to put together a sweet burl table for my parents too.  I started with the table tops.

These are already cool. Ben really liked the live edge look, and the contrast between the darker heartwood and the sapwood. To make up these tabletops, I took one live edge piece and cut it in half, so I had two lengths that I could join together. The top picture shows that the slabs only have one live edge, so I ripped out a board for the table bases, and cut the remaining live edge to the right lengths. I also had a piece of wide cherry laying around, so I cut the same length out of that and ripped two boards for the centerpiece. Then I put everything through the planer to get it to the same thickness, and routed the cut edges using a rabbet. So I was able to rabbet these three boards together with plenty of glue surface it turned out nice.

Actually, it turns out that I either didn't get the thickness the same or didn't have the router bit set high enough, the cherry ended up a few millimeters too low under the surface. After the glueup was cured, I pulled out a batten and faired a curve on each end, then cut that clean. After sanding everything flush, I still didn't have a good top so I had to bust out the totalboat epoxy to raise up the cherry to the level of the walnut. 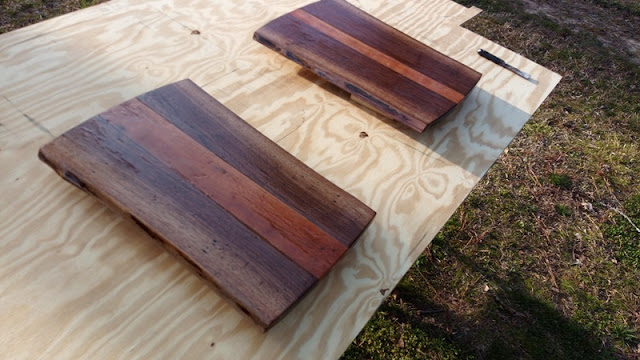 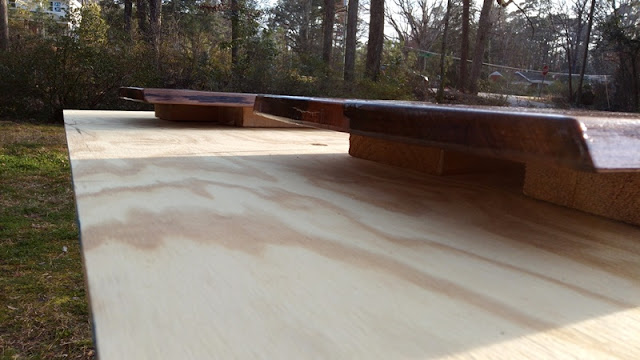 These table tops turned out fantastic, until I started putting the epoxy on there. Maybe I didn't mix it enough, or maybe the temperature just wasn't right outside, but it would not cure no matter what. I left it baking in the sun for a week straight and still had sticky parts. I ended up taking it off with a planer and a shitload of 40 grit sanding belts.

Email ThisBlogThis!Share to TwitterShare to FacebookShare to Pinterest
Labels: Side Tables

We had demo complete last time, ready to install the new butcher block countertops. These had to be cut and fit precisely in order to get a clean install. 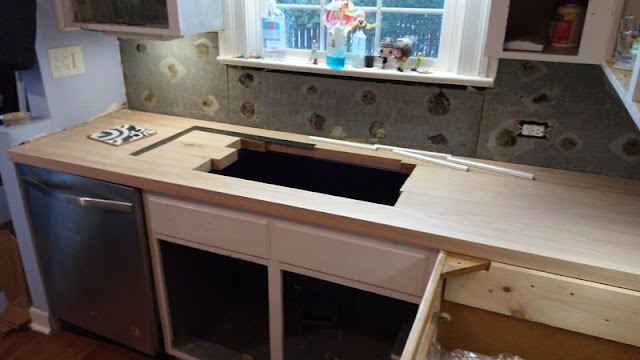 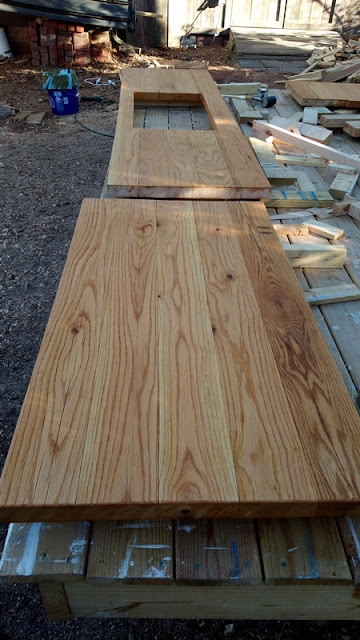 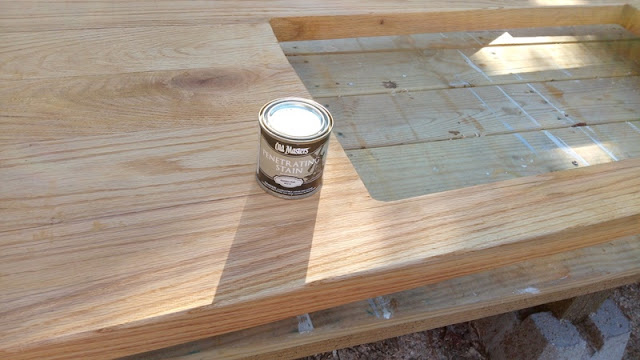 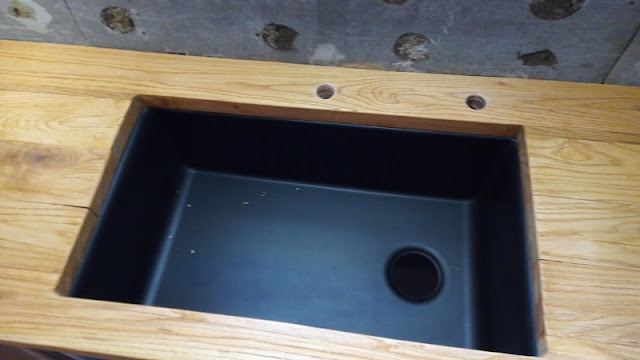 Overall these turned out fantastic. The color and grain are exactly what we wanted, the tile is gone and these butcher block countertops are installed and fantastic. I just glued them down, no mechanical fasteners. There were still some gaps in the joints, those got filled in with glue or caulk.

Update: you can see in that picture that the notch fits around the door jamb nice and flush. These were installed a few months ago, and I still haven't put the tile in, and those air-dried countertops finally dried some more? Now there is a 2" gap between that door jamb and the countertop. I think I'm going to end up replacing these with edge grain countertops anyway.
Posted by Carolina John at 7/05/2020 10:37:00 PM No comments:

More of those countertops

These countertops are cool, but still kind of weird. I'm still building them, and at the same time, it's demo day! 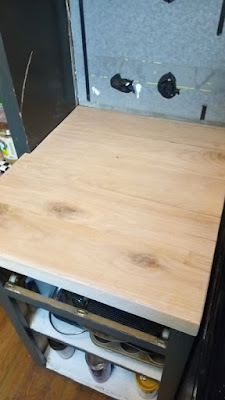 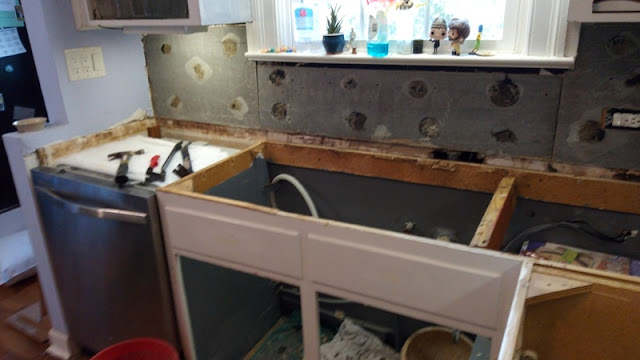 This turned into a wild weekend! We had to demo the old stuff, finish sizing the big countertops, frame the sink, and cut the hole into the big piece for the sink. All before the plumber comes on Monday afternoon!
Posted by Carolina John at 5/18/2020 12:11:00 AM No comments:

Carolina John
I am a sterotype living Raleigh, NC with the wife and 2 kids. 40+, endurance junkie with a penchant for marathons, trail, and triathlon races. It keeps me smoke free and happy. I also enjoy organic gardening and healthy eating, and work as a software developer.